It was a real joy to have Lloyd Pietersen with us recently to present a paper on ‘Does the Matthean Jesus really love his enemies?’ He was participating as part of the Humanities Research Group Seminar Series for the Newman Humanities Research Centre.

Lloyd began by conceding that this was his first time presenting an academic paper on the Synoptics (or Matthew in particular) and that this was very much a work in progress. The focus was Jesus’ instruction in Matt 5:44 to “love your enemies and pray for those who persecute you”, from the Sermon on the Mount, and argued that this idea broadly conflicted with the canonical and non-canonical Jewish understanding of ‘enemy hatred’.

Lloyd then noted that some scholars have questioned whether Matthew’s subsequent depiction of Jesus actually lives up to this teaching or ethic of enemy love. Notably, Ulrich Luz, in his book, Matthew 21–28: A Commentary (Minneapolis: Augsburg, 2005) asserts:

For me there is a fundamental contradiction between Jesus’ command to love one’s enemies and what happens in the woes with the scribes and Pharisees. It is a contradiction that cannot be explained away. “We must say, therefore”—and we must do it openly and publicly—“with the words of Martin Luther: this text does not ‘promote Christ.’

Lloyd stressed that he was concerned with Matthew’s presentation of Jesus (the ‘Matthean Jesus’) rather than attempting circumnavigate the complexities of identifying the historical figure of Jesus and his actual sayings. He then drew our attention to the language of punishment and the ‘destruction’of his enemies (paralleling contemporary Jewish notions of ‘enemy hatred’), noting that the tone and, at times, even vocabulary, appeared to conflict with his earlier teaching; for example, the use of μωρός (mōros), ‘fool’, in Matt 5:2 and then 23:17 & 19. Lloyd then, more specifically, focused upon Jesus’ language and attitude concerning the scribes and Pharisees in his denunciation of them (the ‘Woes’) in Matthew 23. 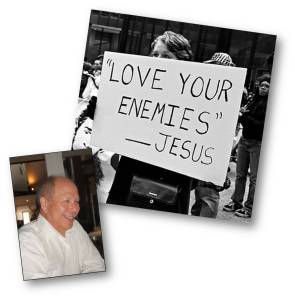 The apparent conflict between the instruction to ‘love your enemies’ and the aggressively, robust attack on the scribes and Pharisees and the call for their destruction, has traditionally been explained as ‘love your enemies’ belonging to the authentic teaching of the historical Jesus and the ‘Woes’ being a later reflection of the conflict between the Matthean community and the Jewish religious authorities that were subsequently retrojected onto Matthew’s Jesus.

Lloyd explored a number of alternative ways of reading these problem passages. He noted that assuming the Matthean parables relating to punishment (the ‘wailing and gnashing of teeth passages) as eschatological and/or eternal needs to be questioned, pointing out that many imply an ‘immediate’ or ‘imminent’ event – possibly the catastrophic events of 70 CE. Lloyd also suggested that, if one reads these texts within the prophetic milieu, this would help to explain (or at least contextualise) the robustness of Jesus’ language. Reading these passages in the light of the Hebrew prophetic tradition, also helps us to understand these words not as the judgement of condemnation but as prophetic warnings of the danger of imminent judgement.

I have sought to demonstrate, in substantial agreement with Wright, that Jesus uses judgement language to warn about imminent judgement. In this he is very much in line with the Hebrew prophets who warn of coming judgement if the leaders and/or people do not repent. Because the coming judgement is so severe… the rhetoric is so extreme. To love an enemy is not merely to let them continue in their current course of action without confrontation. Enemy love is tough love.Enemy love is speaking truth to power.

Download full text of paper as pdf: Does the Matthean Jesus Really Love His Enemies

As you might imagine there were many questions. We are really grateful to Lloyd for his generosity and time, and we particularly appreciated that he felt he could try out something ‘new’ with us – not many academics would be prepared to do that! The collaborative spirit of enquiry from such a wide range of disciplines (Historians, English, Drama, Theology) made this an immensely fun, thought-provoking and enthralling session. Why can’t all seminars be like that?!

One thought on “Lloyd Pietersen on ‘Does the Matthean Jesus really loves his enemies?’”