The sun is at last shining. Most of the undergraduates have dispersed leaving the library and atrium feeling strangely empty and rather lonely. However, the campus is far from quiet. Major building work is underway; buildings are cordoned off, the chapel stands gutted and open to the elements, and the sound of heavy plant machinery fills the hot summer air. All this tells us that the spring/summer semester has now drawn to a close and this affords me a brief respite in time to give you a round up of news about the centre for the year so far – and a very busy year it has been!

The year started off with Sue leaving us for three months as she had been awarded the William Barclay Distinguished Visiting Fellowship at the University of Glasgow in recognition of her expertise in biblical interpretation. It was a real honour for Sue (and the department) and reflects the important contribution that she is making to biblical studies.

Although it was a little strange to go past her office with the door closed and no lights on, she had an invigorating and exciting time with our colleagues in Glasgow. But it was also really nice to welcome her back after Easter and have her once more among us – door open and office lights on!

More news about Sue further down the page

It was wonderful to welcome back Symon to Newman. One of the areas in

which Symon is involved concerns raising awareness on disability (with particular reference to mental health issues). He presented an absorbing session to our second years on the politics of mental health in the Gospels (with particular focus on the account of Legion – Mark 5:1-10 and //s), looking at how mental health has been addressed in commentaries. It was one of those discussions that was both eye-opening and challenging… and you get the feeling that you will never quite see things in the same way again!

Later Symon presented a session on his new book The Upside-Down Bible (published by Darton, Longman and Todd) which is a fascinating exploration of people’s understanding of Jesus’ teaching when they hear it for the first time.

Symon spent a little time talking about his thinking behind the book and the groups of people with which he worked (including, Muslim, Jews, atheists, LGBT, sex-workers, investment bankers, etc.). He then went through their responses to some of the teachings of Jesus as recorded in the Gospels (for example, Luke’s parable of the pounds: Luke 19:12-27). This was a really enjoyable and illuminating talk that highlighted the influence of 2000 years of Christian tradition on the way we understand these parables and teachings. It also served to emphasise the divide between those familiar with the Christian biblical tradition and those outside of it – something those involved with evangelism might need to consider a little more closely.

For more details of Symon and his book, click here.

It was a real pleasure, as always, to have Lloyd with us once again. Lloyd took

two sessions (both second year modules), talking to our students about Anabaptism, the Bible and anarchy. It was a privilege to be able to draw upon Lloyd’s extensive knowledge of the Anabaptist tradition throughout history.

Lloyd also gave a public lecture on ‘Anabaptist Apocalypticism, Sex and Violence: Lessons from Münster’. Lloyd explored the different influences and events that contributed to this pacifist group who renounced all violence perpetrating such appalling atrocities for, what they believed, to be God’s end-time work. Lloyd concluded by pointing to some worrying parallels in the contemporary geopolitical environment.

In case anyone missed this lecture, Lloyd has generously allowed us to post the paper on which his lecture was based. You can access it (with a fuller synopsis of his lecture) by clicking here.

In May we were treated with a visit and illustrated presentation from Jim Triggs (St John’s University, Minnesota) concerning the St John’s Bible project.

Jim gave a fascinating talk, presenting an overview of the project (its scope, history and aims) as well as talking about aspects of its production and the team of artists and theologians behind it. Jim also brought with him one of the volumes of the Heritage Edition; the Gospels and Acts. We were given the opportunity, before and after the presentation, to take a closer look at it. It really is a magnificent and visually stunning piece of work.

The project and the completed volumes raise a number of important issues about the nature of the text and the relationship between art and text (particularly, art as hermeneutic) that would be good to explore at a later date. This is made very plain by some of the more modern representations (DNA sequences, environmental pollution) incorporated in the Bible’s artwork. It was interesting to note in Jim’s talk of the close partnership throughout the project between theologians and artists.

More details on the project and Jim’s talk can be found by clicking here.

Perhaps the biggest and most exciting piece of news this past year was Sue being made Professor of New Testament and Ancient Judaism! We are all really delighted for her, particularly, as she is the first female professor at Newman (we hope there will be many more to come!). Although it was announced last year, we had to wait until her inaugural professorial lecture in May before we could properly celebrate it and welcome her to the post.

The title of her lecture was ‘Rewriting the Exodus’ and examined a second century BCE Jewish text, the Exagoge. Thought to have been written in Egypt by Ezekiel the Tragedian, it is a rewriting of the biblical Exodus account in dramatic form in Greek iambic trimeter. Sue showed us how studying a text like this can throw light on the way in which biblical tradition was received within the cosmopolitan Jewish diaspora –  as well as the creative latitude that writers like Ezekiel had in recreating these old traditions for their contemporaries.

For those who missed this presentation (and it is well worth looking at) we have the complete lecture in video (Panopto) format that is free to everyone. You can access it, as well as find out more about the lecture, by clicking here.

Finally, we have just completed this year’s Summer Greek  course: First Steps into the World of New Testament Greek.

As before, the week long course combined elements of language acquisition with sessions looking at aspects of the world in which the New Testament texts were written and then circulated. Over the week we all successfully negotiated the problems with learning a new alphabet and, by the end, participants were reading and writing simple senses and clauses in New Testament (koine) Greek.

Juliette Harrisson (Senior Lecturer in History) once again joined us and took two sessions. The first introduced us to some online tools that provide useful resources for reading Greek texts. Juliette used John 1:1 to show the richness of the Greek language and the attendant difficulties of retaining its nuances when translating a text into English. Juliette then played host as she introduced us to some non-biblical Greek texts.

One of the things that I enjoy most about this course is the diversity of those attending. As in previous years, we had Newman students and staff as well as those from outside the university. Although representing a wide range of age and experience, there is always a very strong supportive atmosphere that develops. This makes the group work aspects of the course so effective and fun.

It is amazing what can be accomplished in just one week and a number of those attending expressed the thrill and excitement of reading from the New Testament in Greek – at one point we were actually working from a manuscript (Codex Sinaiticus). It certainly creates a feeling of closeness with the text and the world in which it was first circulated.

We will be running Summer Greek again next year – keep an eye open here (or contact us directly) for details closer to the time. 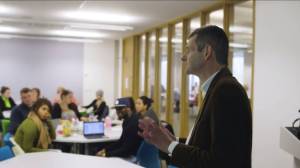 The main biblical teaching this semester has predominantly focused on the first year module ‘Reading Sacred Texts: The Jewish and Christian Bible’. This is an introductory course that begins with an overview of the Bible in its historical and contemporary settings. It then introduces students to literary, historical and contextual approaches to the text and provides an opportunity to apply these approaches to texts.

Newman provides a wonderful opportunity to teach a very wide range of students from a diversity of cultural, religious and ethnic backgrounds. It is always a thrill to work closely with students as they explore together texts in new and challenging ways. Their interaction with the subject is always stimulating and I often learn as much from their discussions as they do.

It is also a real joy to write that, after a number of years working with the department and the centre in the capacity of Visiting Research Fellow, I am now a permanent member of the faculty staff. I am really grateful to Sue and all my departmental colleagues for their long suffering, their support and the way they have made me feel part of their team.

We have some really exciting plans for the coming (academic) year. However, they are still in the planning stage… we’ll be letting you know about them very soon!